HomeUncategorized Ice, snow, and water: Until when?

Ice, snow, and water: Until when?

We do not want to start this post in an apocalyptic way. However, we must consider the data provided by the latest United Nations study on climate change. Yes, we know: Nobody likes to read bad news, but maybe that’s what had us looking the other way on several occasions. Nevertheless, there is still a little time to do things right. Climate change came a long time ago, and little by little we are living its consequences in an increasingly brutal way, and among the most palpable consequences is the fact that places like the province of Mendoza are exposed to accelerated melting of its glaciers and scarcity of snowfall in winter, which has started to feel more and more like some kind of extended fall. Those years filled with abundant snowfalls that kept the main ski centers of the province alive for both tourists and mountaineers are far away — almost two decades away — and this lack of snowfall has brought another unexpected consequence in our mountain activity. 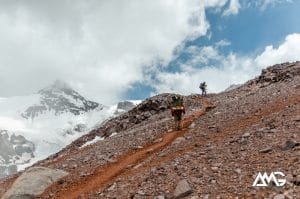 The last season in which Aconcagua Park was open for ascents, a lack of winter precipitation meant that the high camps did not have snow for the expeditions to melt. The groups that climbed from the end of November to the first week of December had to do something that had never been necessary before: carrying the water from the base camp to Plaza Canada, that is, Camp 1 of the Normal Route. Fortunately, in December, the snowfall provided water for the rest of the season. Scarcity of water in the base camps is not a problem, since both the lagoons that are on the outskirts of Plaza de Mulas and the water that rises from the upper Horcones glacier are an invaluable reservoir for sports activity, since expeditions only need an almost minuscule part of what is stored in the glacier, or the ice can provide. With this seemingly sober outlook, we can only adapt. In the not-too-distant future, every group will probably have to carry the water to the high camps, and expeditions will have to reformulate certain parts of their logistics. It is not something serious. Worse would be not having water, and this is not the case. Still, the world is changing. The individual task that falls to each one of us is to take care of our natural resources. We will not make a post to list all the initiatives that can be done in this regard. That will be homework for everyone who reads this article.

Despite all the above written, we will not close this post in a pessimistic way. We refuse to give in to hopelessness. There are good people fighting for sustainable change, and we believe that everyone’s together could mean a lot. Just as the human being can destroy, he can also rebuild. We have been able to accomplish monumental achievements as a species. This is the time to show that we can do it once again.