Homeblog Do I need to hire porters in Aconcagua? Everything you need to know about it to make the best decision.

Do I need to hire porters in Aconcagua? Everything you need to know about it to make the best decision.

Climbing Aconcagua, as in any expedition of the same kind, requires a significant effort from the climber. It’s a mountain that, on its most walked routes (Normal and Polish Traverse), doesn’t involve any technical skill, but it does represent a physical challenge. It is an accessible mountain, but it is not one for those who don’t come prepared; and that is why the porting system is a central part of any of our groups since porters can considerably relieve those who choose not to carry their load on their back, allowing them to save more energy to just focus on the summit. That is the purpose of any porting system, such as the one on Everest, Aconcagua, and even Kilimanjaro, just to name some of the best-known examples. The idea of this post is to clear up as many doubts as possible so that whoever joins our expeditions can fully understand what they are going to find on the mountain. Without further due, let’s get to the questions: 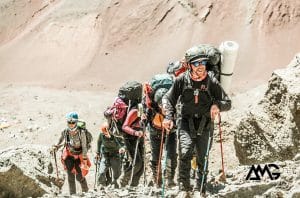 How is the porting system in a scheduled expedition?

The porting system for a scheduled expedition is really simple. Each member has two types of items that they carry in their backpacks from the base camp to the different altitude camps. The first type of equipment comprises all the items climbers bring for the ascent (sleeping bag, double boots, coat, etc.), and the second one is the part (divided equally among clients and guides) that belongs to the common expedition equipment, and that comprises pots, tents, white gas, food, thermos, stoves, etc.

On Day 8 of the schedule, the group carries common expedition equipment to Camp 1 (Canada).

These are days for porting exclusively. Nevertheless, from the moment we start ascending, each person has to carry his own equipment and the proportional load of the expedition he is in charge of. The days of porting to camps 1 and 3 are used both to lighten the load and to acclimatize.

On Day 13, the group carries to Camp 3 (Plaza Colera). As in Normal Route, these days have been organized for porting exclusively. Since the beginning of the ascent, each passenger will carry both his personal equipment and the proportional equipment of the expedition.

One more thing that is always worth clarifying: On the approach trekking to the two base camps, — and even to Confluencia — the climbers’ entire gear is carried by mule. During this trek, each one should carry only their personal backpack with water, food, and a jacket.

How is the porting system in a private expedition?

The system of porting in private groups is exactly the same as that of a schedule expedition, since in this type of program only the starting date changes — determined by the participants of the expedition — and the members that make it up, who generally tend to be friends or families with the same goal. Everything else, including the porting system, is the same as a scheduled expedition. 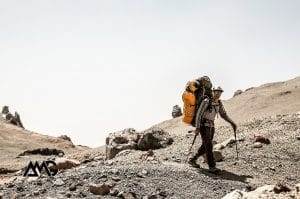 Do I have to bring a separate backpack for the porter?

Not at all. Each porter has their complete mountain gear, since all of them are students at the School of Guides, and, therefore, mountaineers who have all their equipment to perform the porters’ tasks, and all kinds of ascents on Mount Aconcagua. In addition, the backpacks they use have much more load capacity, ranging between 90 and 110 liters.

If I hire a porter to carry my equipment, is the porter going to walk next to me?

No. Porters walk faster and without stopping between camps, unlike clients. They leave earlier and move much faster than the passengers of an expedition, with the aim of reaching the destination camp before the members of the expedition. This is the ideal goal. However, from time to time, for reasons mostly related to weather or force majeure, they arrive at the destination camp at the same time the expedition does.

In general, if a passenger hires a private porter to carry either his personal equipment, the part of the expedition equipment that he has to carry, or both, the load to be carried must be given to the porter the day before departure from the basecamp, and if the carrying takes place between one high camp and another (or even the descent), the porter will arrive to collect the cargo early in the morning.

How many kilos is a porter carry? 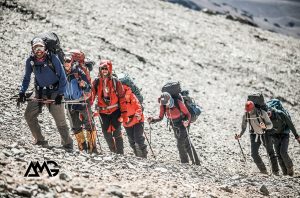 If I don’t hire a porter, how many kilos will I have to carry from my corresponding part of expedition equipment?

Generally speaking, and making an average of everything that each client must carry up, the days for porting, they can carry up to 10 kilos of expedition equipment.

Can I arrange a carry with the porters without the mediation of the expedition guide, the basecamp, or the porter manager?

Absolutely not. The company — either with our sales team in the city of Mendoza, the basecamp managers, the porter managers, or mainly the expedition guide — handles all the porting.

Can I pay for porters by credit card, even from the high camps?

Yes. Porters can be paid by credit card either in the city of Mendoza, from the passenger’s country of origin, or in base camp — before the expedition starts, since height may add difficulty to the process —.

Do I have to tip the porter?

This is not an obligation. In any case, if the porter performed any special task or made an extra duty towards the client for whom he is porting, or if the client is simply happy and satisfied with the service offered, the client is completely free to give him a tip if he so wishes. There is no stipulated amount for this, and it depends only on the passenger’s goodwill.

Do I get a discount for paying the porter service in advance?

Yes. There are always good discounts for those who pay for their porting packages up to 45 days before the expedition starts.

Should I bring my scale to weigh the load that I give to the porter?

Although there’s no need, passengers can bring their scales if they wish. Both the porter manager and our porters have their own scales to weigh the load. 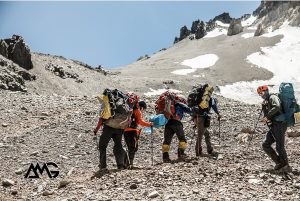 Is it advisable to hire porters instead of carrying the weight of my equipment and my part of expedition equipment?

This is also a question that we frequently receive. Nevertheless, it should be answered by each climber according to their goals. We always recommend our clients hire porters since by going up less loaded, they increase — not guarantee — their chances of reaching the summit for the simple reason that they will rest better. Carrying out the entire ascent with 15 or 20 kilos on your back is entirely different from climbing with only some food, water, and warm clothes from one camp to another. The ascent is always a bit harder when carrying all the weight, and, for many, that extra help that can be decisive to reach the summit.

These are the most frequent questions any person who wants to come to Aconcagua may have. We think that everyone must know all the options beforehand since the best decision is the one made with the largest amount of information. Our job is to set the best infrastructure and staff possible in order to give the best chance of reaching the summit to those who choose us. Just that. And believe us, this is not a small thing. In fact, for those who come to climb Aconcagua, it means everything.