Homeblog Aconcagua: Just for climbing? How about trekking?

Aconcagua: Just for climbing? How about trekking?

The highest mountain in the Western Hemisphere is a gigantic magnet for those who want to climb the American Continent’s top. This is how people and expeditions who have ascended it have described it for over 40 years. So, as with all the majestic mountains in the world, in the beginning, those who were looking for its summit visited Aconcagua almost exclusively. But in the past few decades, the world of trekking popped up slowly but surely. This phenomenon did not occur only in the southern hemisphere. 30 years ago, only mountaineers made it to Everest base camp. Today, trekking in Nepal is an activity in itself that moves hundreds of people per year. 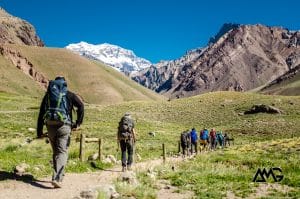 The same happened in Aconcagua. The growth of trekking has been permanent. And this has led people from all over the world to get to know the mythical colossus of America. As a result, a vast percentage of all the people who enter Aconcagua Park do so to make a trek, which is not only less demanding than the ascent but also requires less time. There are one-day treks to Confluencia, three-day treks to the South Face of Aconcagua, treks to the base camp of the Normal Route that last seven days, and treks to the base camp of Plaza Argentina (on the other side of the mountain), which last four days and include a one-way trip by helicopter to the Horcones entrance of the Park. In short, there is a nuance of options for all tastes and budgets. Now, let’s take a look at the difficulties and challenges of each of these walks.

Day trekking is obviously the most accessible and for a wider audience. It requires moderate physical preparation (a good physical condition). No previous experience is necessary, since we leave Mendoza city in the morning and that same night we are back at our hotel. This trekking allows us to know a camp full of mountaineers from all over the world, who are in transit towards the normal route, or mountaineers who make a brief stop to have a drink on their way out of Aconcagua Park after having done promotion. The landscape, as in all the Aconcagua Park, is spectacular, and that is another of the wonders of the Central Mountain Range: just by walking a short while you can reach incredible places.

The trekking to Plaza Francia takes three days, including two nights in Confluencia (3,400mts), so the requirements are different in terms of physical condition and experience at altitude. The experience is different for someone who comes from a place at sea level and has never slept at height than for someone who does an activity that includes sleeping at heights above 3,000 meters. Ultimately, it all comes down to how our body adapts. However, being a gradual ascent, acclimatization is carried out lightly and almost safely in the vast majority of cases.

This trek requires a minimum of equipment, which, in case you haven’t brought anything, you can rent in Mendoza. The highlight of this trek is the viewpoint of the brutal and magnificent southern wall of Mount Aconcagua, which is an imposing mass of ice and rock that measures three kilometers high by seven wide.

And for those moving into the major leagues of trekking, we have the one to Plaza de Mulas base camp in the above-mentioned Normal Route. This is a walk that requires a more significant physical condition since it has a bigger difficulty than either of the previous two options. This trek can be done in several ways. The most common of all is to add trekkers to one of our expeditions since the first seven days of the ascent program are the same as the ones of this trek. Once everyone has reached the base, trekkers also have the possibility of climbing mount Bonete (5,000 meters), which is part of the expedition’s acclimatization plan and whose location is just in front of the West Face of Aconcagua, which provides some of the most extraordinary photos of the whole trip. It is quite common that girlfriends, boyfriends, or parents of the expedition members accompany them in this first part. After the ascent to the Bonete, they return to Mendoza, and join their loved ones a few days later, when the expedition has already finished. 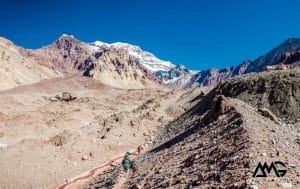 And last but not least, we have chosen the newest trek that we have added to our list: the trekking to Plaza Argentina, the base camp of the 360° (Polish Traverse) route. This four-day trekking begins at the Quebrada de Vacas and passes through Pampa de Leñas and Casa de Piedra, to finish at the second largest camp on Aconcagua: Plaza Argentina. This trekking shows the extraordinary diversity and contrast in flora and fauna between one side of the mountain and the other since the landscape of Quebrada de Vacas is much greener and with a much richer fauna than what we can see on the other side. This magnificent trek concludes with the descent by helicopter to the Visitor Center at the entrance of the Park.

As we can see, trekking options are quite diverse. That is one of the greatest advantages of all the options that we can choose from. Not all who wander are lost, and not all who come to Aconcagua seek its summit. Many just want to take a look at that imposing mountain to understand why hundreds of people a year seek its summit.